Born in the wilds of Boston, Massachusetts, Jane is proud to be a product of the Boston Public School system. After high school and a brief stint in the theater department at Boston University, she traveled to London to seek her fortune on the stage. Not finding it, she returned to Boston and engaged in much dues-paying until she saved enough money to head West. She holds a BFA in filmmaking from San Francisco Art Institute, had a nearly 30-year career in marketing/marketing communications, and received an MFA  in creative writing from San Francisco State University.

She is the winner of the 2014 Michael Rubin Book Award. Her book, Look Busy, was published by 14 Hills in November 2014. She's published a whole bunch of other stuff, too -- here's a list.

She lives in Oakland, California with her wife and assorted cats, chickens, and bees. 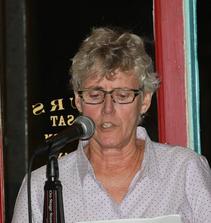